Thank you to Fantastic Flying Book Club for letting me participate in the tour for Crier’s War by Nina Varela! Check out FFBC’s website to sign up to be a tour host! 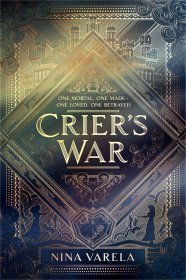 Genre: Young Adult, Fantasy, LGBT
Synopsis:
After the War of Kinds ravaged the kingdom of Rabu, the Automae, designed to be the playthings of royals, usurped their owners’ estates and bent the human race to their will.
Now Ayla, a human servant rising in the ranks at the House of the Sovereign, dreams of avenging her family’s death…by killing the sovereign’s daughter, Lady Crier.
Crier was Made to be beautiful, flawless, and to carry on her father’s legacy. But that was before her betrothal to the enigmatic Scyre Kinok, before she discovered her father isn’t the benevolent king she once admired, and most importantly, before she met Ayla.
Now, with growing human unrest across the land, pressures from a foreign queen, and an evil new leader on the rise, Crier and Ayla find there may be only one path to love: war.
Find it Here:
Goodreads | Amazon | B&N | iBooks | Book Depository | Kobo | Google Books

This fantasy almost felt a little dystopic in some aspects, such as how Crier was made or born. All other aspects felt very fantasy which was fun. It made for a unique story.
Crier has always believed she’d take of as sovereign of Rabu but soon realizes that her betrothed, Kinok, may have other plans and may be cunning enough to replace her. Crier is smart and ambitious. She’s studied politics from past and present to make sure that when she becomes Sovereign she’ll be able to make the most educated of rulings but she’s starting to believe that her status as a woman is going to prevent her from doing so. I really enjoyed Crier’s story as she starts to realize she’s going to have to fight in order to keep her place as her father’s heir. She begins to develop a friendship with her lady in waiting, Ayla and her feelings may even grow beyond that of just a friendship. You’ll get to know Crier and find that she may be just as cunning as those around her.
Ayla is out for revenge and the best way to do that is to get as close to the daughter of the sovereign as possible. By befriending Crier she’ll be able to get close enough to kill her and take revenge on those who killed her family. What she doesn’t expect is to develop feelings for Crier which may prevent her from fulfilling her plans. In the end she is going to have to make the decision to follow through with what she started or to take a different path and let Crier live.
This story is filled with plots and uncertainty. You will struggle to know how to trust and that may even be Crier and Ayla. It was a bit slower paced than I was expecting but overall it is a great YA Fantasy if you’re looking to read one. 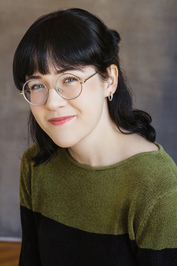 Nina Varela is a nationally awarded writer of screenplays and short fiction. She was born in New Orleans and raised on a hippie commune in Durham, North Carolina, where she spent most of her childhood playing in the Eno River, building faerie houses from moss and bark, and running barefoot through the woods. These days, Nina lives in Los Angeles with her writing partner and their tiny, ill-behaved dog. She tends to write stories about hard-won love and young people toppling the monarchy/patriarchy/whatever-archy. On a related note, she’s queer. On a less related note, she has strong feelings about hushpuppies and loves a good jambalaya. CRIER’S WAR is her first novel.
You can find Nina at any given coffee shop in the greater Los Angeles area, or at www.ninavarela.com.
Find her Here:
Website | Goodreads | Twitter | Instagram