A huge THANK YOU to Algonquin Young Readers for providing me with a beautiful copy of Tigers, Not Daughters the new YA Contemporary with Magical Realism feels by Samantha Mabry. 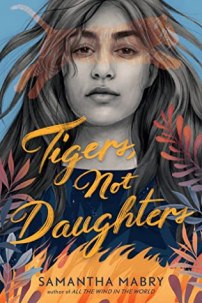 Genre: Young Adult, Contemporary, Magical Realism
Synopsis:
The Torres sisters dream of escape. Escape from their needy and despotic widowed father, and from their San Antonio neighborhood, full of old San Antonio families and all the traditions and expectations that go along with them. In the summer after her senior year of high school, Ana, the oldest sister, falls to her death from her bedroom window. A year later, her three younger sisters, Jessica, Iridian, and Rosa, are still consumed by grief and haunted by their sister’s memory. Their dream of leaving Southtown now seems out of reach. But then strange things start happening around the house: mysterious laughter, mysterious shadows, mysterious writing on the walls. The sisters begin to wonder if Ana really is haunting them, trying to send them a message—and what exactly she’s trying to say.

In a stunning follow-up to her National Book Award–long listed novel All the Wind in the World, Samantha Mabry weaves an aching, magical novel that is one part family drama, one part ghost story, and one part love story.

Part family drama, part ghost story, and part love story, TIGERS, NOT DAUGHTERS is a stunning follow-up to All the Wind in the World, firmly establishing Mabry as a novelist not-to-be-missed.

Stories that are written with bits of magical realism are some of my favorite and most powerful reads. This one is definitely one of them.

This book includes different points of view from each sister left behind after the death of their sister Anna. You’ll get an inside view of how each one is grieving with her loss and Mabry does a good job of making you feel what they feel.

There are some scenes that include levels of domestic and emotional abuse that may be difficult for some people.

Samantha Mabry credits her tendency toward magical thinking to her Grandmother Garcia, who would wash money in the kitchen sink to rinse off any bad spirits. She teaches writing and Latino literature at a community college in Dallas, where she lives with her husband, a historian, and a cat named Mouse. She is the author of A Fierce and Subtle Poison and All the Wind in the World. Visit her online at samanthamabry.com or on Twitter: @samanthamabry..

samantha was born four days before the death of john lennon. she grew up in dallas, playing bass guitar along to vinyl records in her bedroom after school, writing fan letters to rock stars, doodling song lyrics into notebooks, and reading big, big books.

she spends as much time as possible in the west texas desert.

A FIERCE AND SUBTLE POISON (Algonquin Young Readers, spring 2016) is her first novel.

“Tigers, Not Daughters is a phrase from Shakespeare’s King Lear,” says Mabry, author of three young adult novels now, and a community college writing and Latino literature teacher in Dallas. “In the play, it’s used as an insult, hurled by Albany at Lear’s selfish and disobedient daughters. When I recently heard that phrase spit out with such venom during a production, it struck me—how could I write a story in which this wasn’t an insult, but, in a way, praise? I’ve always been of the mind that some parents frankly deserve to be disobeyed, and I’m sure many young people would agree. And I’ve always been interested in tinkering with various sources of inspiration, such as stories that explore Latinx identity and the various forms of assimilation. I’ve very loosely based the dynamic of the Torres sisters on my mother’s often complicated relationship with her sisters, and on their experience of being a mostly English-speaking Mexican-American family with roots near the US-Mexico border.”