I have been waiting all year for the release of Crown of Oblivion and it is finally here!! I enjoyed Julie’s first duology Ivory & Bone and Obsidian and Stars so getting another book from her is THE best!

Thank you to Fantastic Flying Book Club for letting me participate in the tour for Crown of Oblivion by Julie Eshbaugh! Check out FFBC’s website to sign up to be a tour host! 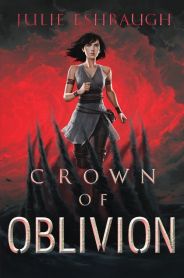 Title: Crown of Oblivion
Author: Julie Eshbaugh
Publisher: HarperTeen
Release Date: November 12th 2019
Genre: Young Adult, Fantasy
Synopsis:
Astrid is the surrogate for Princess Renya, which means she bears the physical punishment if Renya steps out of line. Astrid has no choice—she and her family are Outsiders, the lower class of people without magic and without citizenship.
But there is a way out of this life—competing in the deadly Race of Oblivion. To enter the race, an Outsider is administered the drug Oblivion, which wipes their memory clear of their past as they enter a new world with nothing to help them but a slip of paper bearing their name and the first clue. It’s not as simple as solving a puzzle, however—for a majority of the contestants, the race ends in death. But winning would mean not only freedom for Astrid, but citizenship and health care for her entire family. With a dying father to think of, Astrid is desperate to prevail.
From the beginning, the race is filled with twists and turns. One of them is Darius, a fellow racer Astrid meets but isn’t sure she can trust. Though they team up in the race, as Astrid’s memories begin to resurface, she remembers just who he was to her—a scorned foe who may want revenge. Astrid also starts to notice she has powers no Outsider should—which could help her win the race, but also make her a target if anyone finds out. With stakes that couldn’t be higher, Astrid must decide what is more important: risking her life to remember the mysteries of the past, or playing a cutthroat game in order to win her—and her family’s—freedom.
Goodreads | Amazon | B&N | Book Depository | iBooks | Kobo | Google Play

Crown of Oblivion is so different from Julie’s first series which I love because we get to see a different writing style from her.

This book takes you right into the action within the first 10% which I really enjoyed. It is a fast-paced YA Fantasy that takes Astrid on a journey that will take her from being an indentured servant to a free citizen. Being the surrogate to the princess hasn’t been easy and Astrid has faced many hard times but when she gets the opportunity to enter the race of oblivion she takes it.

As soon as Astrid is dropped into the race with no memory of who she is and only a map containing one clue, she’s immediately tested. She comes across people that seem familiar to her but she can’t remember why and she soon realizes that she may have an advantage over the other racers that if revealed could disqualify her from winning. She is helped by many different people, some she can trust and some she doesn’t but takes the help out of survival. It’s a keep your enemies closer kind of situation and the best way to survive is to make allies with those that are using her for the same reasons.

Astrid faced many challenges throughout this book but got through them like a rockstar. I am so glad I got a chance to read this book and get to know Astrid! 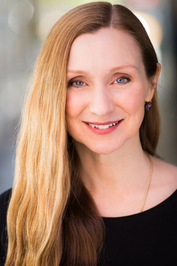 Julie Eshbaugh is a YA writer and former filmmaker. She made two short films and then spent several years producing an online video series for teens which received several honors from the Webby Awards. Her new YA fantasy standalone, CROWN OF OBLIVION, is coming from HarperTeen November 2019. IVORY AND BONE (HarperTeen 2016) and OBSIDIAN AND STARS (HarperTeen 2017), her prehistoric fantasy duology, are out now. You can learn more about Julie’s writing escapades by visiting www.julieeshbaugh.com.
Website | Goodreads | Twitter | Pinterest | Instagram 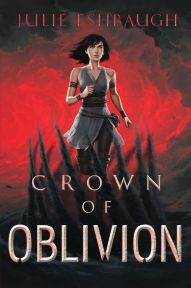