If you’re looking for a YA Contemporary filled with emotions than We Are the Ghosts by Vicky Skinner is the book for you!

Thank you to Xpresso Book Tours for letting me participate in this YA Contemporary blog tour! 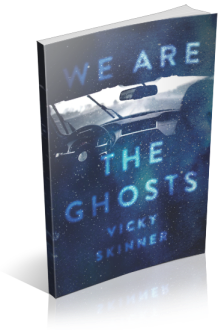 After her estranged brother suddenly dies, a girl embarks on a road trip to rediscover who her brother really was in Vicky Skinner’s contemporary YA novel, We Are the Ghosts.

When Ellie’s estranged brother, Luke, dies in a car accident, she’s not sure whether to be devastated that she lost the person who was once her best friend or enraged, still, that he left without a word a year ago. Now, the only people who seem to understand what she’s going through are Luke’s best friend and his ex-girlfriend, who she bonds with over their desire to figure out where Luke went when he walked out of their lives.

As she gets closer to them, and closer to Cade, a boy who seems determined to get to know her better, she realizes that she’s not the only one with reasons to be angry at Luke. And when Ellie makes a discovery that changes everything, she and her new friends hit the road, hoping that following Luke’s trail will bring them answers about the life Luke was living away from them.

There’s something about YA Contemporaries about grief that just call to me. In We Are the Ghosts you’ll follow four teens as they take a road trip to find the answers they’ve been searching for for the past year.

When Luke left a year ago without a word to Ellie her world fell apart. Now she’s sitting in a church at his funeral fighting the monsters inside her who feed her anger at Luke’s leaving, and now his death. Why did he leave? Why did he have to die? All the questions piling up with no hope of answers, until a few days later when she finds a letter on her desk. A letter with a return address and a map she hasn’t seen for years inside.

Ellie’s portrayal of grief will give you so many feels. She’s not only struggling with the death of her brother but the abandonment she’s been running from ever since he left. Now she’s on a road trip that includes stops her brother may have been to within the year he’s been gone. After a run in with a fortune teller in New Orleans’s, seeing a glimpse of Luke from the top of the St. Louis Arch, and finding the unexpected at the end of her journey Ellie has to come to terms with what she’s feeling and realize that it’s OK to be mad at her brother and that if he had told her where he was she would’ve begged to go with him.

The three other characters that go along with Ellie include Luke’s best friend, Luke’s ex-girlfriend, and the boy Ellie stopped talking to without explanation. You’ll uncover all the secrets each character has while they all discover how to cope with the loss they’re all feeling.

This book is a beautiful story about learning to cope with the grief of a loved one. I enjoyed getting to see how each character in this story contributes to the healing process for all of them, not just for Ellie. I would definitely recommend it to anyone who loves stories about self-discovery, dealing with grief, and learning to move on. It was wonderfully written and I enjoyed the road trip aspect. I think it really lent to the theme of going on a journey to healing.

Born and raised in Texas, I don’t act like much of a Texan. I like cold weather and hate country music. I have a gorgeous husband, two dogs, and a Literature degree from the University of Texas at Dallas. If I’m not at home reading a book or doing laundry, I’m probably at the bookstore, nannying three rambunctious boys, or stuck on the side of the road with car trouble. I’m a reader, a writer, and a bit of a crazy person.
Author links:
| Twitter | Goodreads 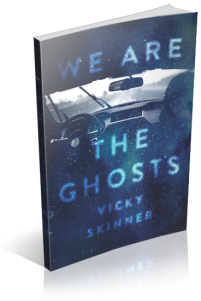 Prize: Print copy of We Are the Ghosts by Vicky Skinner
Tour-wide giveaway (US Only)

4 thoughts on “We Are the Ghosts Blog Tour Review + Giveaway”