Do you love TV shows? If so than you’ll want to check out the new YA Contemporary Going Off Script by Jen Wilde.

A huge THANK YOU to Xresso Book Tours for letting me participate in the tour for Going Off Script by Jen Wilde! Check out Xpresso’s website HERE to sign up to be a tour host!

A TV writer’s room intern must join forces with her crush to keep her boss from ruining a lesbian character in this diverse contemporary YA romance from the author of Queens of Geek.

Seventeen-year-old Bex is thrilled when she gets an internship on her favorite tv show, Silver Falls. Unfortunately, the internship isn’t quite what she expected… instead of sitting in a crowded writer’s room volleying ideas back and forth, Production Interns are stuck picking up the coffee.

Determined to prove her worth as a writer, Bex drafts her own script and shares it with the head writer―who promptly reworks it and passes it off as his own! Bex is understandably furious, yet…maybe this is just how the industry works? But when they rewrite her proudly lesbian character as straight, that’s the last straw! It’s time for Bex and her crush to fight back.

Jen Wilde’s newest novel is both a fun, diverse love story and a very relevant, modern take on the portrayal of LGBT characters in media.

This book was everything!  I loved Bex character so much. As an intern on the set of her favorite t.v. series Silver Falls (Total TVD vibes), she quickly realizes that the show she loves is being written by a tyrant of a man.

I loved Bex’s character! She’s uncertain of herself when she first starts her internship, and even more so after she meets the writer she’ll be interning for. When she takes a chance and gives her script to the head writer she soon finds out that decision could be the end of her writing career. Showbiz is a cutthroat industry but Bex decides she’s going to change the game and fight for what she believes in, and what she knows is right.

Bex faces some challenges when it comes to adapting to the extravagance of the movie business. She’s from a small town and when she finds herself at this big fancy birthday party filled with celebrities she feels uncomfortable. She questions whether the people she’s made friends with will stick around if they found out she comes from a single family household in small town America. She’s also exploring her sexuality more now that she’s on her own. That brings another challenge when it comes to whether or not to tell her mom that she might have a girlfriend.

This book brings light to the prejudice found in the entertainment industry, especially when it comes to tv and film. It touches on finding your own identity and learning to stand up for what you believe in. LGBT relationships are portrayed in such a positive and loving way which I think was my absolute favorite part. The friendships are beautifully done and I  hope we get to see Bex and her crew again!

Jen Wilde is a writer, geek and fangirl with a penchant for coffee, books and pugs. She writes YA stories about zombies (AS THEY RISE), witches (ECHO OF THE WITCH) and fangirls (QUEENS OF GEEK). Her debut series reached over three million reads online and became an Amazon bestseller. Her next book, THE BRIGHTSIDERS, comes out May 2018, and GOING OFF-SCRIPT releases Summer 2019.

When she’s not writing, Jen loves binge-watching her favorite shows on Netflix, eating pizza, traveling to far away places and going to conventions in Marty McFly cosplay. 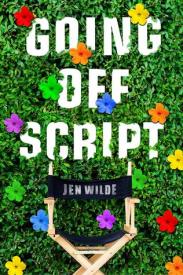 PRIZE: One (1) copy of GOING OFF SCRIPT by Jen Wilde